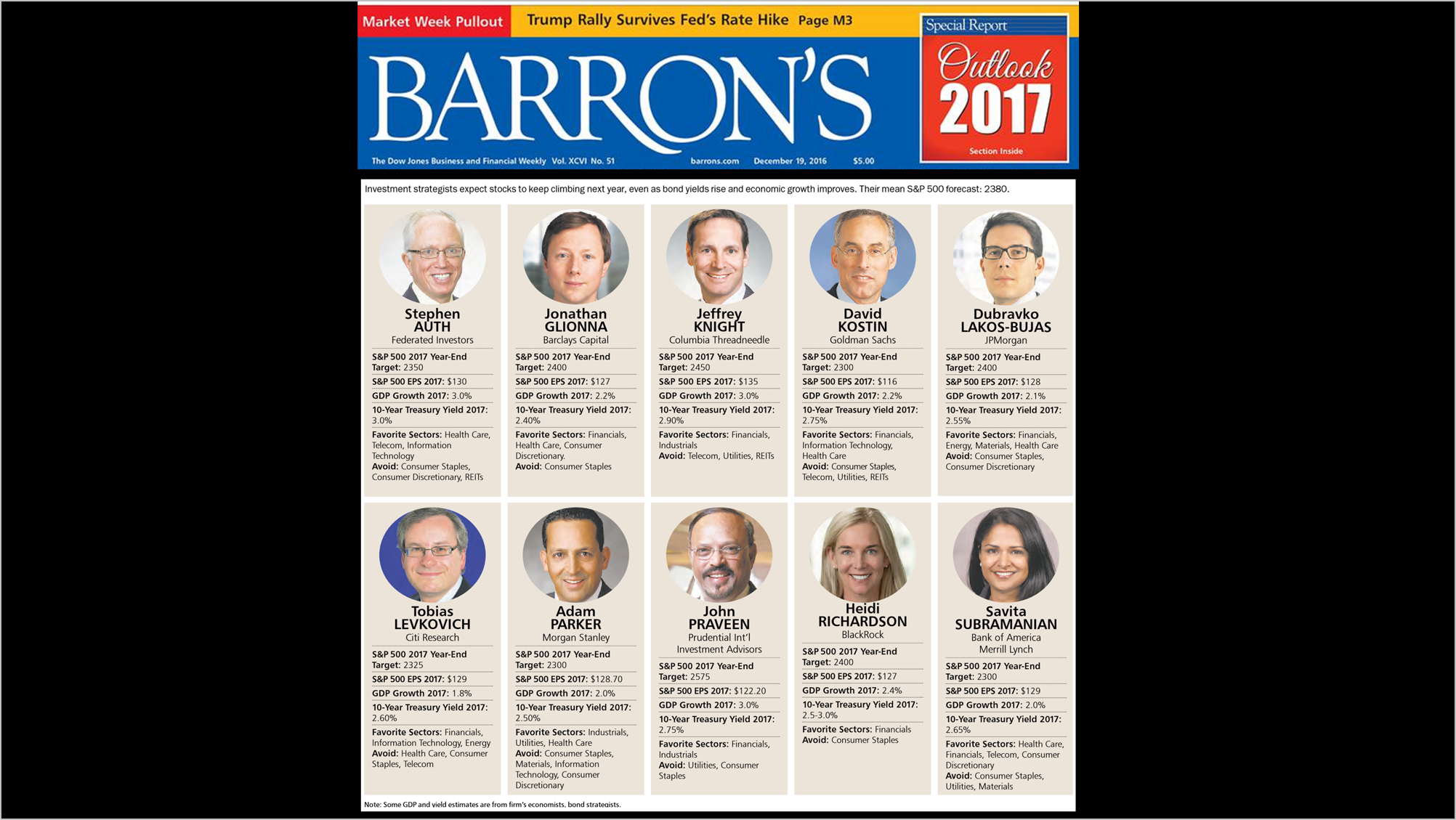 On December 16, 2016, Barron's ran its annual outlook story featuring forecasts from a panel of 10 "top" Wall Street investment strategists. The respected financial weekly publishes its panel's predictions for the stock market for the year ahead and for the sectors they are buying and avoiding every December.

Fritz Meyer, an independent economist, whose research we pay for, has tracked the Wall Street strategists' sector forecasts in Barron's every year since 2005. Mr. Meyer was an investment strategist at one of the world's largest investment companies for over a decade before going independent in 2009. With no products to sell except his research, Mr. Meyer's data tracking the record of recommendations made by big retail brokerages firms represents a rare in-depth look at the success of following Wall Street's investment advice. 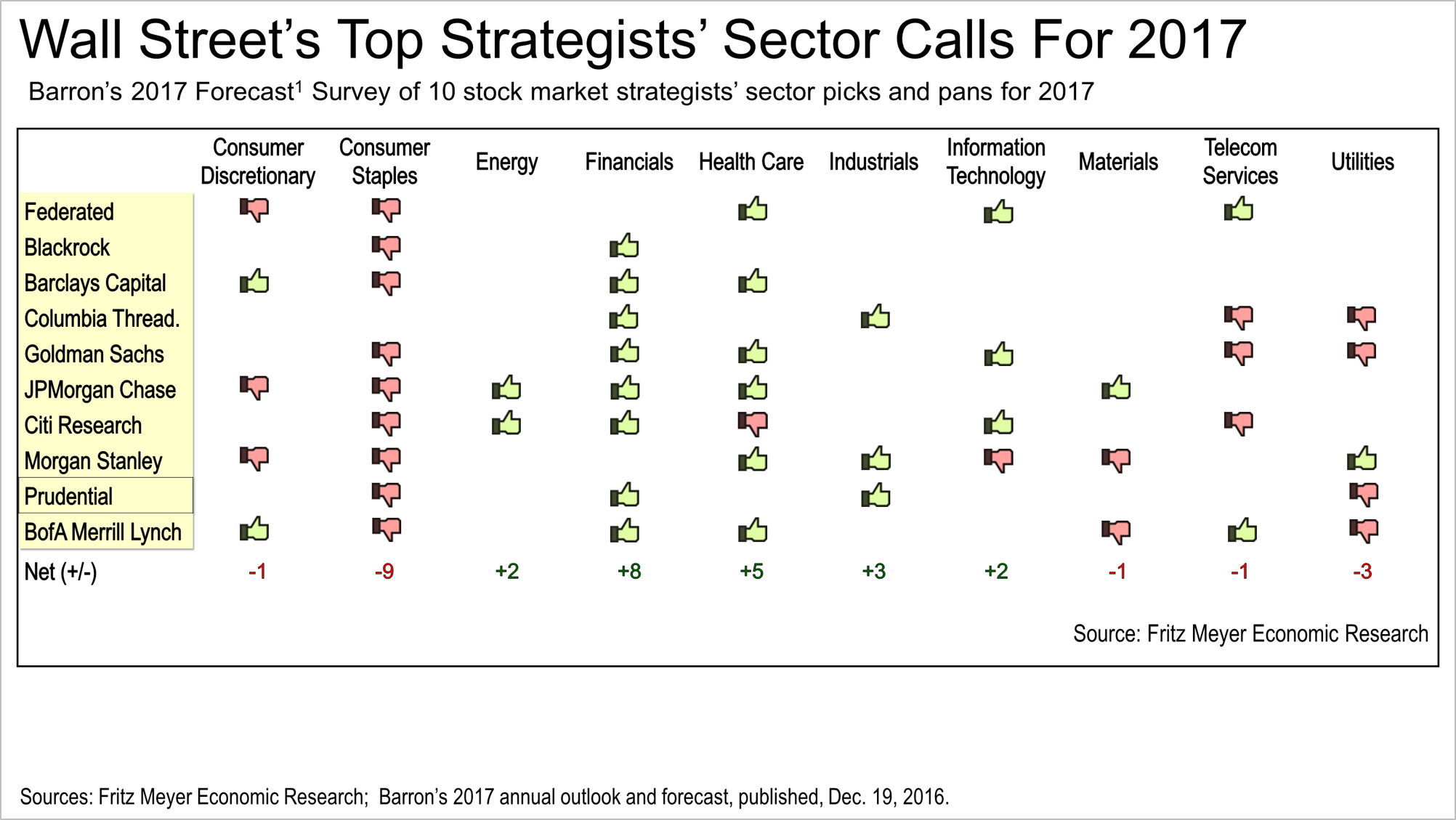 So far in 2017, through July 14, the 10 strategists from the large Wall Street firms have been prescient relative to their long record. Financials was the most favored sector with backing from eight strategists, and health care was the next favored, being picked by five strategists. Consumer staples was by far the least favored sector for 2017. How have these picks and pans performed this year? 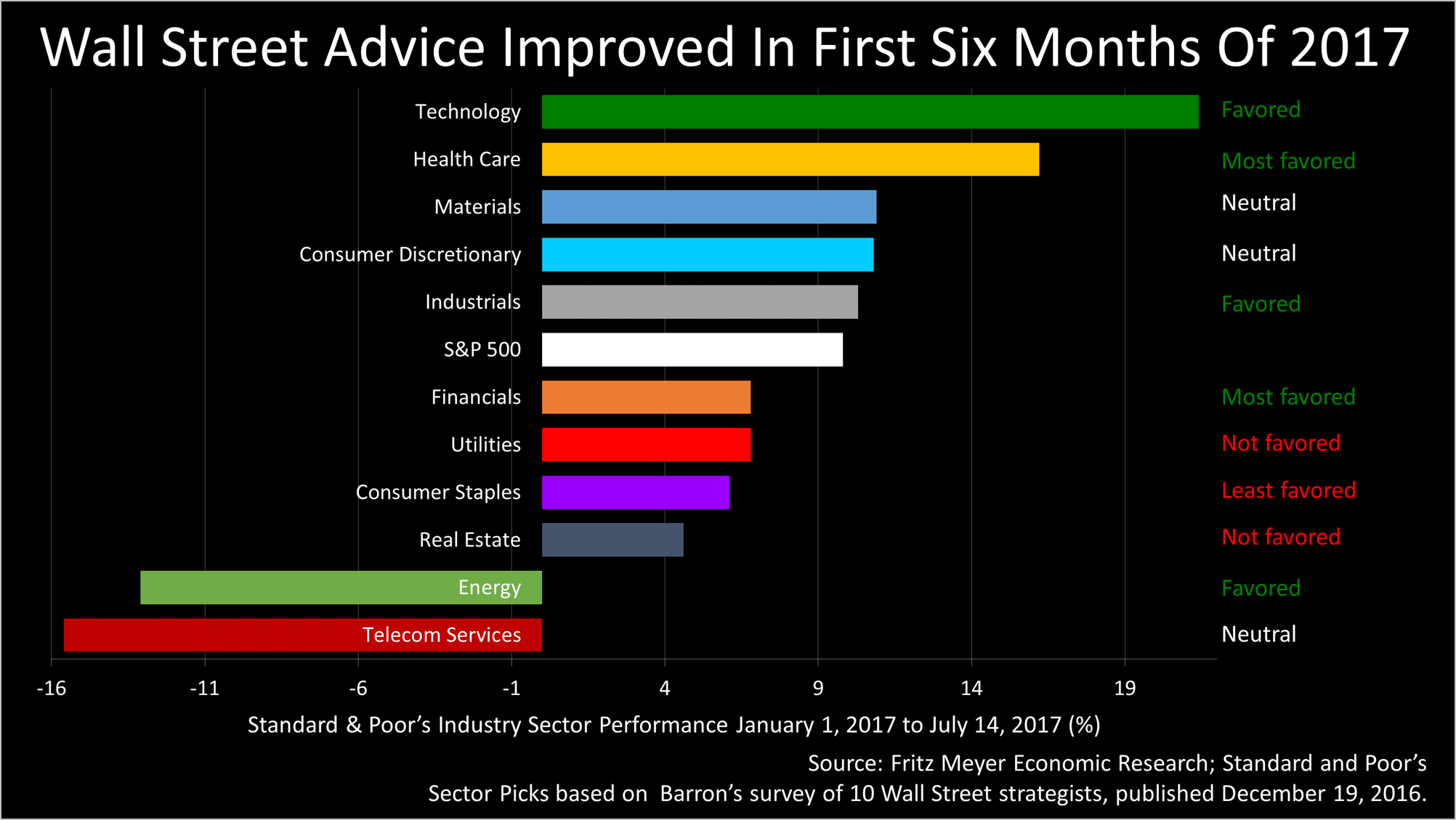 Here are the results from the start of 2017 through July 14. Keep in mind, however, only half of the strategists picked the highly-performing health care sector, which was the second most-favored of Wall Street's picks. Their clear favorite, financials, is underperforming the S&P 500. Energy, one of their favored sectors, is bombing. Utilities, consumer staples and real estate, which were all panned, are all showing positive returns. 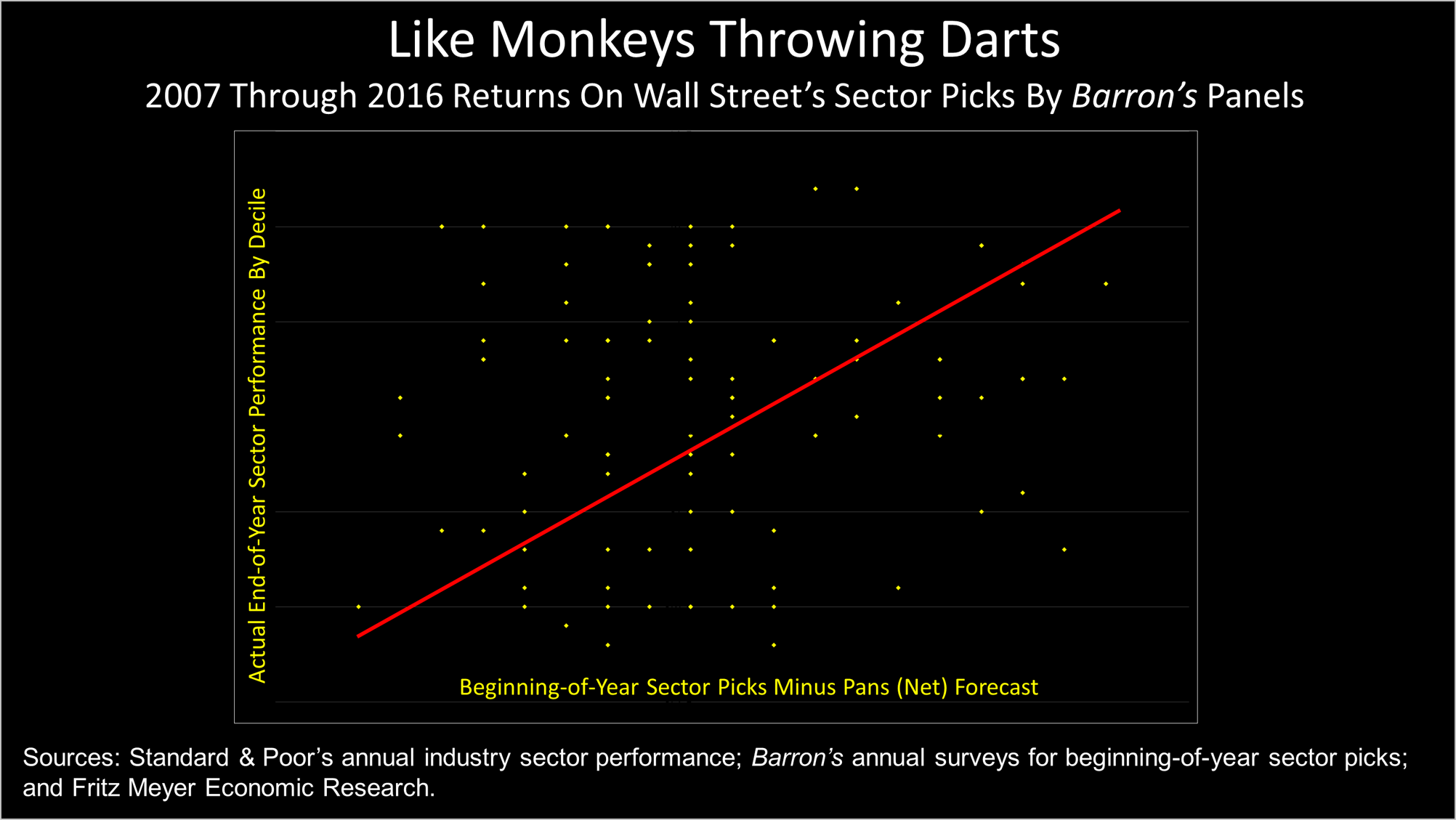 Since the inception of Barron's annual surveys of Wall Street strategists in 2005, results on the strategists' advice has been scattershot. If Wall Street's strategists' sector advice had been correct, then the yellow dots would all lie along the red line. Instead they're random. Wall Street, historically, has been unable to predict how sectors will perform. They're throwing darts, and their aim is off. 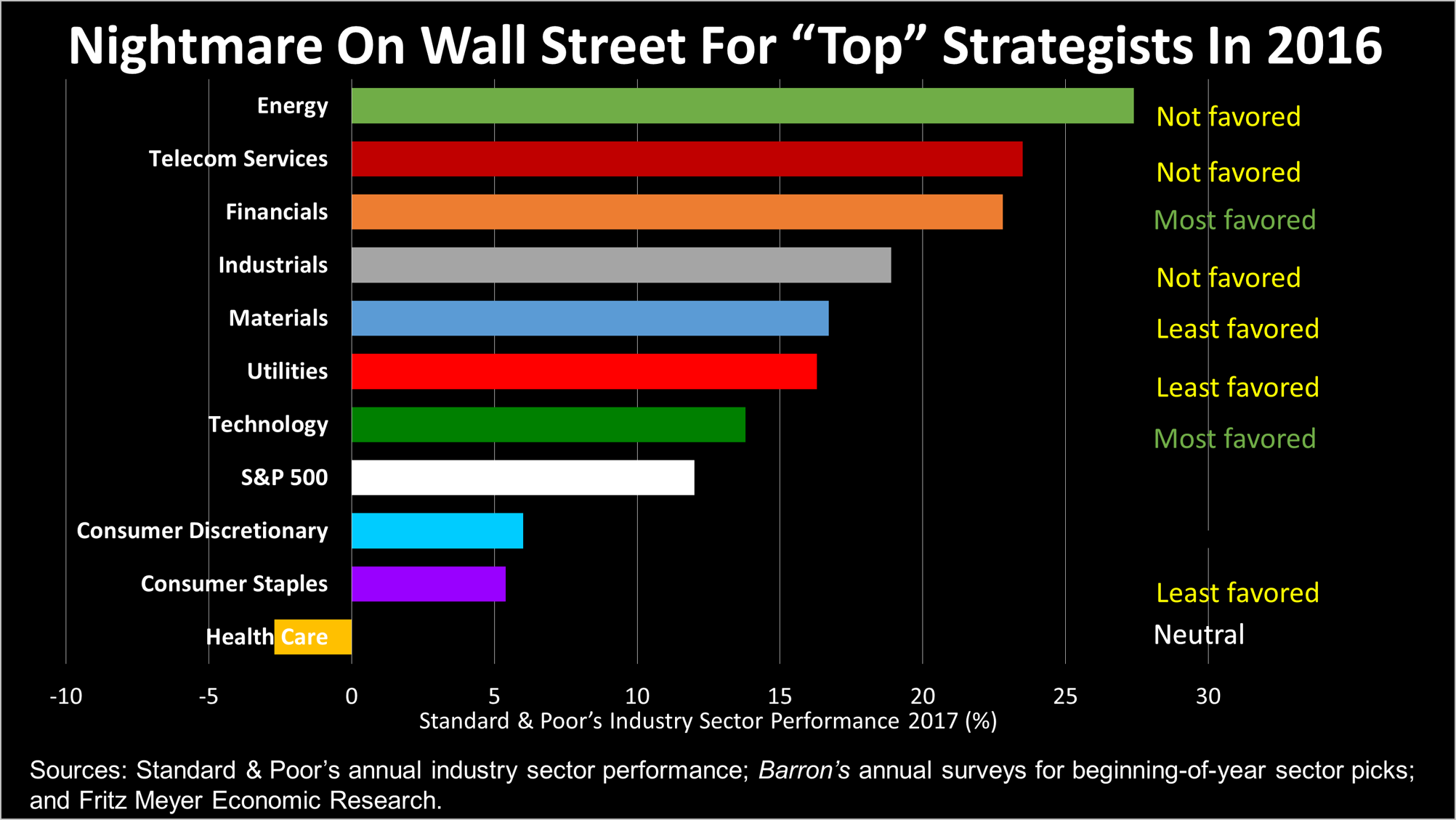 2016 was full of surprises, like the election of Donald J. Trump, and the strategists did not perform well. Energy and telecom services were not the favored sectors of the strategists, but those sectors outperformed all the others. Although the strategists favored financials and technology, and both of those did well, the materials and utilities sectors, which they panned, both beat the S&P 500. 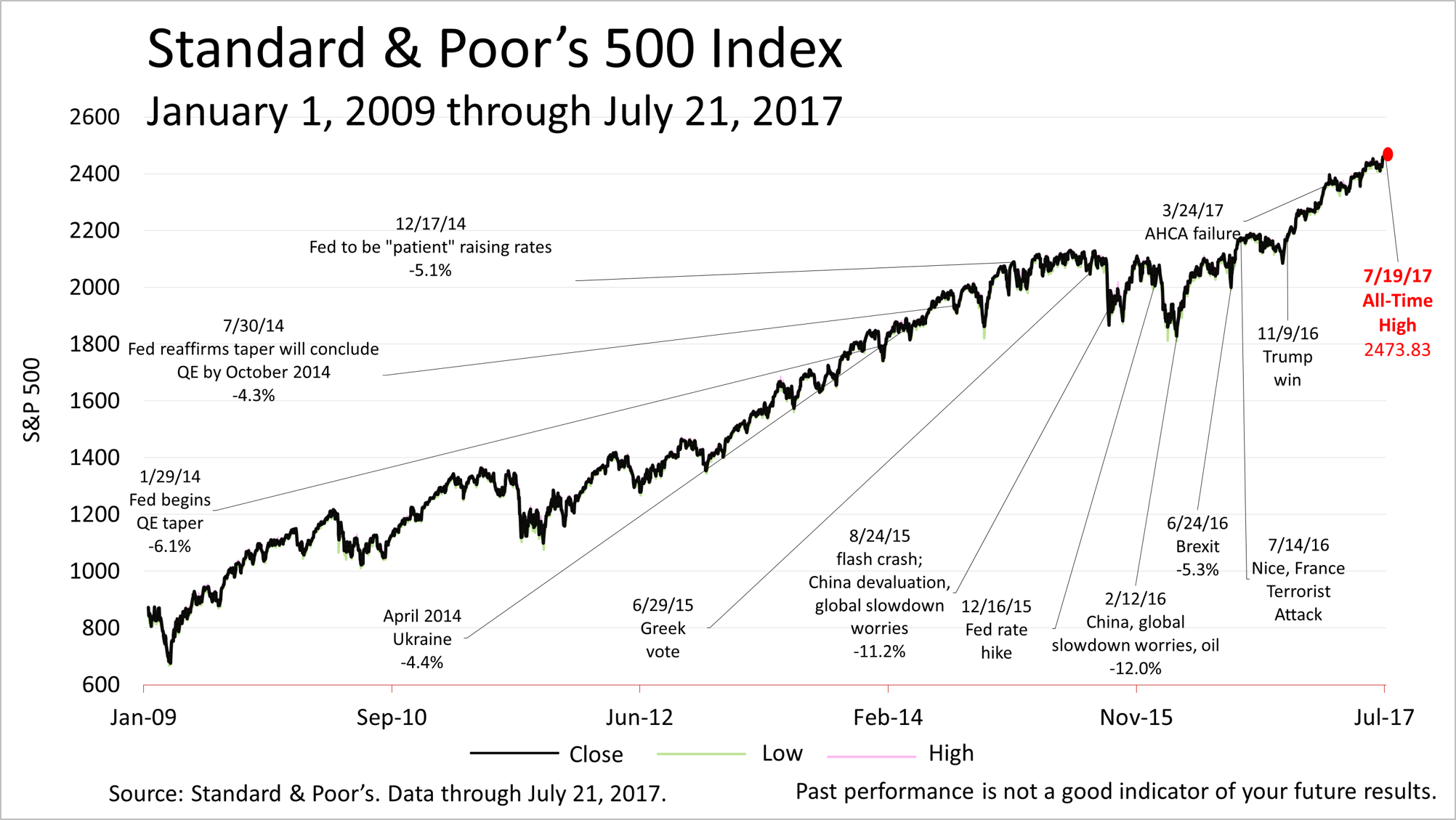 With that in mind, we want to remind you that the Standard & Poor's 500 index closed on Friday at 2472.54, just a fraction off Wednesday's closing price of 2473.83, which set a new all-time high, and a change in sentiment or unexpected negative news could trigger a 10% or 15% plunge at any time. But the outlook for the fundamentals that drive stock prices remains bright and predicting the stock market's future is not what we do.

Meyer's analysis illustrates that the predictions of Wall Street's so-called "top" strategists' are about as reliable at sector forecasting as monkeys throwing darts. It's why we invest based on a strategic, evidenced-based discipline and are independent of the big Wall Street retail brokerages.

We are independent financial professionals communicating at a frequency attuned to you and that you can hear anytime from your smartphone.

This article was written by a veteran financial journalist based on data compiled and analyzed by independent economist, Fritz Meyer. While these are sources we believe to be reliable, the information is not intended to be used as financial advice without consulting a professional about your personal situation.