28 Trillion Reasons to be Vigilant 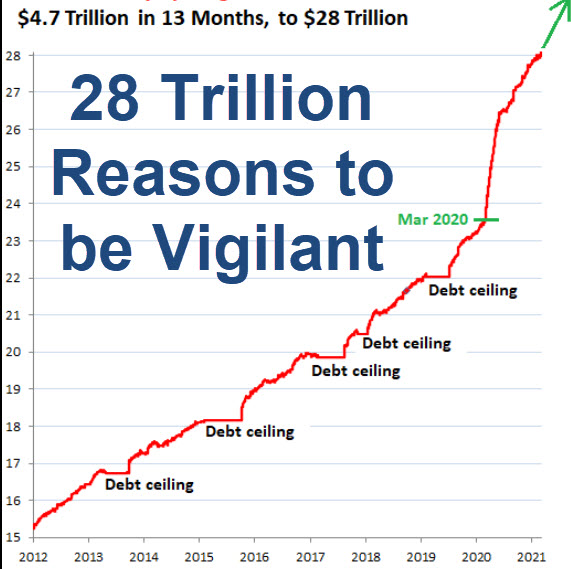 1.The cost of servicing the national debt as a percentage of US revenue is going up.

2.If interest rates rise significantly, even as high as 3-4%, how sustainable is servicing the national debt? The Fed has a significant incentive - 28 trillion incentives - to keep interest rates as close to zero for as long as possible without going into negative yield territory. This would very likely have been the case had COVID never happened. COVID however has provided the US a perfect storm to do keep interest rates at all time lows and inject $6 trillion and counting into the economy. This serves several national purposes: It provides massive liquidity to withstand the shock of COVID, it devalues the US dollar by doing so, which in turn dilutes the national debt value, it keeps interest payments on the national debt as low as possible and it allows for the most optimum conditions for the economy to return to pre-COVID employment numbers.

The counter-productive impact of this policy is of course inflation, an asset boom of historic proportions and a disincentive to return back to work on the part of the labour force who are earning more in unemplyment benefits than they would from going back to work. The latter is transitory as benefits will run out. The other impacts described, less so. As the dollar printing presses continue at full capacity, a dollar earnt is worth less.

3. Deleveraging - the process of reducing debt - has implications. It removes liquidity from the economy, from companies and from the markets. If it happens too quickly it can have a cascading downward spiral impact for companies, markets and countries as we have witnessed in recent and not so recent history accross different markets. The inability to service or collataralize debt creates both cascading, downward pressure risks, it can also dramatically increase risk exposure and freeze the flow of money - interbank and general lending - as we witnessed during the 2007/8 financial crisis. Raising interest rates has serious systemic risks and one must conclude that lower interest rates - 0.5 - 4% - are necessary long term US policy.

4. Overheating the economy. We believe this is inevitable due to the massive influx of money into the economy coupled with low interest rates and a return to pre-COVID employment numbers. The only question or unknown - given the amount of liquidity injected into the system coupled with lower interest rates - is how much higher and how long can hard asset prices in every class e.g. stocks, real estate and so forth go up. Likewise, we are seeing an increase in retail inflation with restaurant chains increasing prices and food prices across all categories steadily increasing over the years. Both can continue longer and higher than logic supposes. One of the main counter measures to stem an over-heating economy is to raise interest rates. The other inevitable impact is a market correction, the severity of which rises in proportion to how high asset prices go in this asset boom.

"I have no doubt that we are in a raging mania in all assets. I also have no doubt that I don't have a clue when that's gonna end. I knew we were in a raging mania in '99, but it kept going on, and if you had shorted the tech stocks in mid '99, you were out of business by the end of the year."3. "I can't find any period in history where monetary and fiscal policy were this out of step with the economic circumstances. We're still acting like we're in a black hole, when in fact the economy's accelerating."

"This time, more than in any previous bubble, investors are relying on accommodative monetary conditions and zero real rates extrapolated indefinitely. This has in theory a similar effect to assuming peak economic performance forever: it can be used to justify much lower yields on all assets and therefore correspondingly higher asset prices. But neither perfect economic conditions nor perfect financial conditions can last forever, and there’s the rub.

All bubbles end with near universal acceptance that the current one will not end yet…because. Because in 1929 the economy had clicked into “a permanently high plateau”; because Greenspan’s Fed in 2000 was predicting an enduring improvement in productivity and was pledging its loyalty (or moral hazard) to the stock market; because Bernanke believed in 2006 that “U.S. house prices merely reflect a strong U.S. economy” as he perpetuated the moral hazard: if you win you’re on your own, but if you lose you can count on our support. Yellen, and now Powell, maintained this approach. All three of Powell’s predecessors claimed that the asset prices they helped inflate in turn aided the economy through the wealth effect. Which effect we all admit is real. But all three avoided claiming credit for the ensuing market breaks that inevitably followed: the equity bust of 2000 and the housing bust of 2008, each replete with the accompanying anti-wealth effect that came when we least needed it, exaggerating the already guaranteed weakness in the economy. This game surely is the ultimate deal with the devil.

Now once again the high prices this time will hold because…interest rates will be kept around nil forever, in the ultimate statement of moral hazard – the asymmetrical market risk we have come to know and depend on. The mantra of late 2020 was that engineered low rates can prevent a decline in asset prices. Forever! But of course, it was a fallacy in 2000 and it is a fallacy now. In the end, moral hazard did not stop the Tech bubble decline, with the NASDAQ falling 82%. Yes, 82%! Nor, in 2008, did it stop U.S. housing prices declining all the way back to trend and below – which in turn guaranteed first, a shocking loss of over eight trillion dollars of perceived value in housing; second, an ensuing weakness in the economy; and third, a broad rise in risk premia and a broad decline in global asset prices (see Exhibit 1). All the promises were in the end worth nothing, except for one; the Fed did what it could to pick up the pieces and help the markets get into stride for the next round of enhanced prices and ensuing decline. And here we are again, waiting for the last dance and, eventually, for the music to stop."

We maintain caution as indicated by Druckenmiller and Grantham's comments and that this unique period in human history necessitates hyper vigilance with respect to wealth and risk management. Proper risk management is critical. It is critical to have a plan that can support and protect your wealth with various scenarios playing out.

If you would like an independent complimentary review and riskalyze analysis, please contact our office. We look forward to meeting you.

Friday, September 24 2021 China, Evergrande and The Boom & Bust Cycles of Capitalism
Friday, September 03 2021 What is a Head & Shoulders Pattern?
Friday, August 20 2021 A Window into Institutional Adoption of Digital Currencies